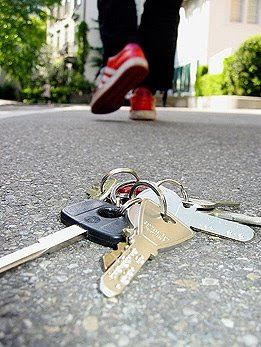 So, it wasn't just Uiscebot who lost his keys this morning. Nope, a similar drama was unfolding a few miles away in sunny (aka wet and murky) Beech Grove. All the kids ready, we might just have been leaving in time to get to school before the bell for once, but where the bloody hell were my keys?? I never lose them. Frantic calls to hubby - which is the usual waste of time as he obviously has a religious belief banning him from answering his mobile, especially when his desperate wife rings multiple times.

On a normal morning I wouldn't be too concerned with missing keys - my kids are so phenomenally brilliant that they can afford to miss a little bit of school. But no, of course this morning eldest child had a school trip to the National Gallery.

I rang a cab. I couldn't believe I was going to have to get a taxi to get the kids to school. But of course, the magic of abandoning the search worked and the keys started yelling at me from the bottom of a little used bag. Teasing mo fo's!!!!

Quick call to cancel the cab (as I am such a nice person.) Fecked the kids in the car. Go! Go! Go! We're ten minutes late... Hurl the kids into school. I then spent 50 minutes sitting outside the school waiting to see if the bus would turn up or if poor child had missed his trip. Why did I wait? Couldn't I have just gone in and found out? I think I was so wound up by the horror that I would have been like a crazy woman.

For I am a crazy woman.

Ps When child got home from trip to the National Gallery all he could do was giggle about the pictures of naked people. Sigh.
Posted by Domestic Oub at 10:44 PM

Oh, you young things. Lose your keys and it's an emergency. Wait till time has had his wicked way with you and losing things is a regular occurrence.
Surprised to hear that yours were in your bag - mine always reappear in the place I started looking. A sort of 'hide and seek' game that isn't funny any more.
Glad that No.1 son was giggling at the nudes. He could have been drooling instead - now that would be a problem!

giggling child is good - unlike his far too sophisticated younger brother. We saw the Fantastic Four movie a few years ago when child number 2 was 4ish - actress Jessica Alba comes on screen - child says in a quiet contemplitive voice 'She's a pretty lady..' And yesterday, 'Dita Von Tease' (i mean, really..) burleques dancer comes on the telly - welllllllllll before the watershed. Child takes one look at her in her skimpy clothing -'hmmm, she's pretty'. ! We're going to have problems with that one...

hmmm, more evidence that the youngest is taking after a certain uncle of his...