I had to take a trip into town. Where once this was a treat - when I was a young slip of a thing - now I am old and curmudgeonly and it's just a pain.

I was picking up passports. Three out of the four monsters needed documentation. I am surprised klaxons didn't sound and red flashing lights didn't spring to life when I submitted their applications... should they be on some international watch list by now? 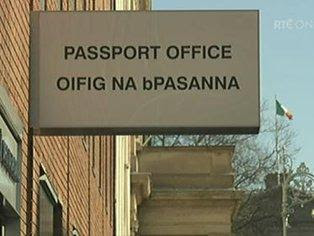 Thankfully I was able to go into town with only one of the mites in tow, all the rest in school - unlike when I brought the applications in. For reason, now flown from my brain due to post-traumatic stress disorder, I had to go in with Baby Oub (Ver 2.0) and T'Oub when doing the drop. Toddlers love big barren waiting rooms that have no entertainment and a lot of waiting. And babies like to cry for the entire duration of your stay. (As do mammys).

It was horrible. And when I got to the counter? Yes, you've guessed it - they weren't happy with the forms. Cause the eldest Oub child - aged 10 - hadn't signed his name on the form. You know, my signature at ten was most definitely my bond and certainly hasn't change a jot since then. But hey, if they wanted it we would have been more than happy to provide it. Only we were told a parents signature would suffice. Arse anyone? Elbow perhaps??? Gaaaahahahaha.

So, in I had trudged a second time, forms carefully signed by eldest Oub (for heaven's sake he printed his name he so didn't know what a signature is let alone actually have one!) and had to bring in the two youngest again. There was more tears this time - all mine - and more waiting. I was fooled into a false sense of security by the fact that there were only two ahead of me in the Q. Of course what I had failed to realise was that my queue was in fact inhabiting a rip in the space time continuum where time had no meaning and it moved as slowly as a Hollywood actor playing a presidential bodyguard throwing himself in front of an assassins bullet. (About as long as that sentence for example...)

But we got there eventually. They decided to issue me a reprieve and deigned to be happy with the forms I pathetically proffered to them, face damp, eyes blotchy and swollen, snot dripping.

I was to return on the 1st of March and collect them.

They perhaps were thinking of the 1st of April. Cause like a bloody fool I expected them to be ready. I arrived, 10am, only one little baba this time, gravy! No one in the queue, extra gravy!! 'Hello mister passport guy!' I said - I even actually smiled at him. "Can I have my passports please?" I beamed.

"Er, they're on a truck right now. Can you come back at 3.30?" he said. Without even the decency to look ashamed. Bastard.

After the shuddering and twitching had stopped I stared at him. I considered yelling. I considered climbing up onto the counter and banging my bare fists against the perspex divide that was the only thing at that moment saving his life.

They had won, they had finally defeated me.

So, what do you do in these circumstances?

Yes, go off and get yourself a dirty great big fry! I needed coffee and I needed grease. But of course, I don't go to town anymore. I don't know the cafes anymore. So, I trudged, looking to find a suitable establishment. It took a while. And I was pissed and hungry. 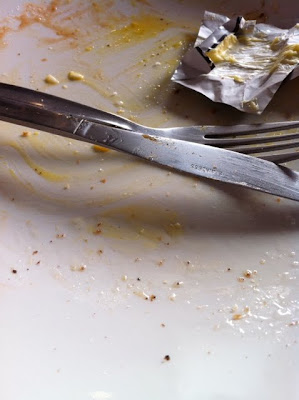 Finally I found a place. Should I have been worried I was the only person there? hmm. Should I have been cross that they put me down the back? (It's a buggy segregation) Should I have been concerned that when other people did come into the place they were all slightly rough looking older women? Ah feck it, the coffee was delicious and the fried eggs were done just how I likes 'em. 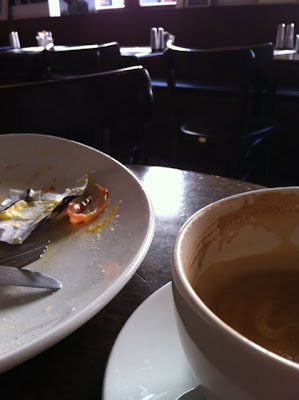 So, I'm going back in on Friday.

Depending on what happens, you may want to skip this blog till Monday next.
Posted by Domestic Oub at 9:44 PM

funny funny. At least the passport office have brightened up my morning!

I would have certainly gone for the 'punch' option.
But enough of that, I want to know more about the 'slightly rough looking older women'. There's a novel right there!

Niamh - I'm glad someone has benefited...

Titus - hmmm, sure, yes I probably show have clocked him one... But I really need those passports! The tickets are bought, hotels booked...

You think this trip was challenging, wait until you get to your destination!! Any chance of a book review before you venture to town again??