The People's Republic of Ireland

So, I should have been updating my blog for the last hour or so, but I was otherwise engaged. I was composing a snitty - yet non-libellous - email to my local political representatives giving out to them for not nominating Senator David Norris for president. Yes, it's all a bit closing the barn door after the horse has bolted - where was my email beforehand promising them all sort of deliciously democratic delights for their vote? The things a girl can do with a mandate could make your eyes water!

But no, I didn't email them beforehand as I just assumed they'd do the right thing and nominate him. I know, am I really that stupid? It appears I am. Really. It's embarrassing. So, now they've all been informed of my disgust (am sure they're just quaking) and I've promised my vote next time to some bloke who thinks Trotsky was David Cameron's more conservative older brother.

(Breaking News!- It appears that Waterford County Council have just done the decent thing and nominated him. Good on ye Waterford CC. That's more like it. ) 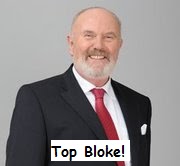 And the thing is, I'm not even sure I am going to vote for the senator. I really quite like him, I think he'd be a brilliant president, the perfect person for the country right now. But I would like a little clarification on some of the more controversial things he's said. But, without him in the race, then I never will get that clarification and I will not be living in the democracy I thought I was living in.

This country's politicians really sucks sometimes.  Hmmm. A lot of the time.


(Breaking news! - Just got a reply to my email from local TD (MP or Congressman for my international readership. Lol) TD says that the councillors "acted in good faith and according to what they thought was the right decision for South Dublin County Council to make". )


Sigh.  So it was the right decision. Wow, winning argument! God forbid they give us any actual reasons... oh, hang on - because there are none! No one is going to come out and say they didn't vote for him because he's gay or because they know he's so popular that he'd stop their guy winning the election.

But silly naive me for thinking there was any honour in politics. I really must have had a blow to the head recently.

So, come on Dublin City Council, meeting this evening, do the right and democratic thing! Nominate Norris!


BREAKING NEWS! - Yay, Dublin City Council stood firm for democracy and Senator Norris is now on the ballot paper! Hurray for democracy! And I'm sure my day long email flame war with the Mayor of South Dublin County Council had no influence...)

This, from his Wikipedia page:

"Even Christ doubted, on the cross. And I think if people say they hear the voice of God all the time and say they know what to do, then impose that on you, politically, it is theological tyranny."

An advocator of tolerance? Heresy!

Best of luck to him, and good for you for turning the tide!

You did it! I'm trying to think what this makes you, but now I've read Dead Acorn I can only think of anti-Canute. Which makes you sound like you're against damp Kings. Oh well, I like the smiley face of the Top Bloke. Having a good smile is terribly important for Presidents. Glad he's on the ballot.