It seems middle child does his best thinking in the car. He ponders the big questions as only a six year old can, as he waits for Lucan traffic to do its worst. Today, as we crawled our way home, he asked me if 'stupidiot' was a bad word. I told him it wasn't even a word, so he could decide. This was a little bit too outside the box for him, so, before his brain short circuited at the lack of boundaries, I told him, yes, I reckoned its a bad word. 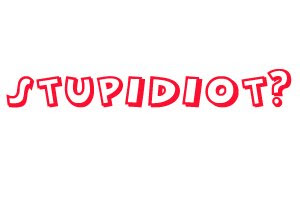 While a little search on google turned up what I thought - that he wasn't the first person to utter this non-word - I did think it was a good effort from his relatively new brain. And it tied in so nicely with Various C's musings not so long ago.

So, I'm in the mood for new words, incorporating the word 'Stupid'.

What have I got so far?

Stupidiom - The thick things only stupid people say.
Stupidiosyncrasies - The unique ways people find to do stupid things.
Stupidgin - The unintelligible makeiupy language Mr Oubliette uses when he is trying to tell me something he doesn't want the kids to understand.
Stupiddling - The utterly pointless and moronic way life often is.


I could go on, but I guess that's enough for now. I will enjoy spell checking this post.
Posted by Domestic Oub at 4:56 PM

Hmm - we could be brothers - me and middle child - if i was a boy - that could be a song - stupidyoncee?

What restrained parents this middle child has. The young royals in our house have often speculated on phrases used by my consort and I. Not one of these words were as respectable as stupidiot. I think your lad is stupidendous.
Drama Queen