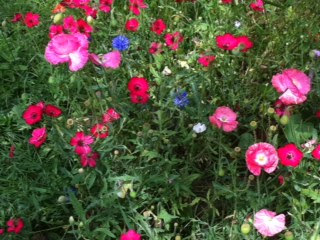 We went to Airfield yesterday. The sun had actually come out from its witness protection program, so we took hasty advantage and legged it over to this lovely working(ish) farm and took in the new piggies, hens, cows and Giant Connect 4. Obviously the Giant Connect 4 is a very rare breed, and possibly only bred in captivity these days. But I must say, it was very friendly and the kids enjoyed playing with it very much. As long as they don't ask to get one of course. I'll have to remind them, a Connect 4 is for life, not just for Christmas ... 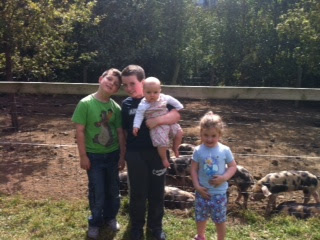 Hands up who thinks I'll do a 'Spot the Pigs' gag? Ha! 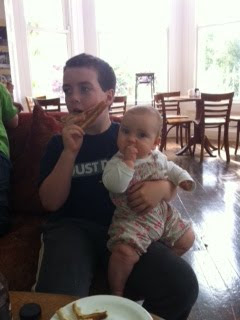 There was ham in them thar toasties. And nary a qualm raised it's guilty head. Really, this was only minutes after cooing over the new piglets. Ruthless. And I had just killed a wasp with my iPhone. Bloodthirsty, the lot of us. 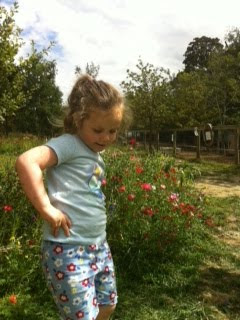 Big Sister Oub was inspired to dance by the beauty she saw around her. The natural splendor, God's scattered glitter of wildflowers, filled her soul with an unstoppable urge to express the joy it inspired. Either that or she's a little teapot. 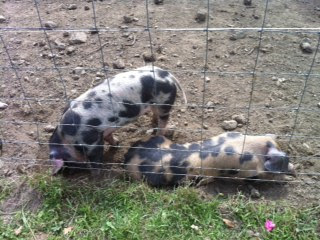 How exciting, more pigs. Spotty. And one had an odd looking bottom. As city types, born and bred we debated for a while whether this odd looking bottom was correct pig genitalia or an actual deformity. We decided, kids and I, that surely God had not intended the piggie privates to look quite this startling. So, in all probability it was a slight developmental whoopsie in porcine utero. We didn't hold it against him. Or her. 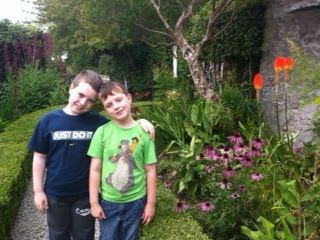 Exhausted from fighting, they lent on each other, much like when boxers snuggle after a particularly ferocious flurry of thumping. 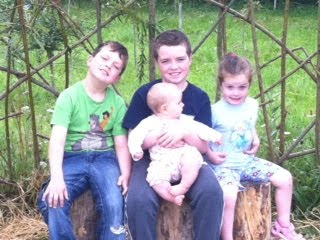 Big Sister would say 'Cheese' and be looking at the camera and Little Sister would look at her (maybe pondering, cheese? Where??) And then she'd look at me and I'd yell at Big Sister to look back at the camera and she'd look at me and say 'Cheese!' and Little Sister would look away again (Where?? Where? Why do I keep missing this phantom Cheese??!) I gave up after try number 10. By which point everyone was cross and the baby was really quite hungry.

So, all in all a fun day. We tried to trick Mr Oub into thinking we'd wasted the only sunny day this year going to Ikea. Sadly, he believed us that that's where we'd been and wasn't cross at all. Just sadly resigned. Oh well.

Brilliant! I laughed like a drain, but that may be assited by the fact I'm also listening to Newsnight on which they are debating the proposed National Citizens Service scheme. A lot of very posh men are saying 'kidz' and 'engage' a lot.
Big Sister D'Oub! My, how she's grown.
And surely husband (love the colour co-ordinated spines idea, btw) knew you hadn't been to Ikea when there wasn't a new "Tsaard" or "Bjirrna" in the house?

I have a serious Ikea habit, which I am of course receiving intensive therapy for, but it means Mr Oub can't tell if there is more or less unpronouncably named stuff in the house.

"I had just killed a wasp with my iPhone."

Is there really an app for that? That might be just the thing that convinces me to buy one.

You didn't feed the piggies any of the ham, did you? That would be so wrong ...

this one's a classic, for me it was the phantom cheese that won the day, great stuff

I'd loved it from d beginning - sun coming out of the witness protection programme indeed! Great post - made my morning shine!