It's a big day in the Oub household.

A child of ours is participating in a sporting final!!!

Ok, it's actually Bowling - a sport only marginally more strenuous than darts. But we are thrilled all the same. No Oub family member has ever before shown an aptitude for anything that involved hand/eye coordination.

So, we are very excited for second eldest son. For it is he who is in this final as part of his Cub Scout troop.

We need to bring some pride back to Loverly Lucan. It's not that we don't love those most famous sons of Lucan - Jedward. But you can love something without being particularly proud of the fact. Like me and french toast and bacon drizzled with maple syrup, mmmhhmmmmmm. I'm not proud of my self there. Or me and the celeb gossip pages on the dailymail online. REALLY not proud of myself there. In fact, deeply, deeply ashamed. And I probably shouldn't go into the contents of my iPod... (for every White Stripes track there are at least two from Step etc) But enough of the self flagellation. It isn't even Sunday.

Just took a phone call from Mr Oub. The bowling is underway! Exciting!

Before they headed off I oscillated between informing son that it was the taking part that counted, and telling him to kick woggled arse. I'm a pretty inconsistent mother as it is, so a little more on the mixed message front isn't going to make much difference. The savings account is already open for the intensive therapy they are all going to need. So I may as well get my moneys worth and really feck them up.

I'll let you know how it all goes later :)

And then tomorrow second son is in action again. This time it's piano grade exam time. Poor fecker. But he has nerves of steel so isn't that bothered. Me? I'd be more nervous than a bomb disposal guy with sudden onset Parkinson's.

We're terribly proud of him again here as he seems to have inherited Grandad Oubs musical abilities. Which are considerable. But what makes second son so special is he is this odd freak of nature - I must have been sent home with the wrong baby - he actually works hard too. Once he has finished his homework, he puts his bag away and immediately sits down at the piano to practice. His brother (whom I do love too, I promise) has to be injected with 10ccs of Cattleprodadrine to get him to do his practice (Also very talented, just a little motivationally deficient. Definitely the correct baby sent home with me there.)

Second son is a great child. I was informed at his recent Parent/Teacher meeting that he had placed on the 100 percentile for his English and Maths aptitude scores. Teacher said it was quite rare for a child to score top for both disciplines. He has a great bunch of friends. Lovely kids. Teacher said he is well able to stand up for himself, but he also looks out for others. That he is kind. He writes wonderful stories and is one of the top in his class in Irish.

At home he gets his sister her breakfast in the morning and packs all the lunches while I look after baby oub. He is a great conversationalist and I enjoy his company.

Could I gush more? Probably!

But you see, second son had a tough old start in life. He was plagued for years as a toddler with health issues - nothing serious, but just enough to involve regular pokings and proddings from doctors of all sorts. And hospital stays and all that unpleasantness. He has execma. And hayfever. And multiple allergies. He currently needs eye drops and eye cream twice a day for his Atopic Eye Disease, which hurt. And he will need these for a few years yet. And most difficult of all is for years he had Speech and Language Disorder. You couldn't understand a thing the child said. Can you imagine, a child as smart as he is, unable to be understood by anyone. It was awful. He was miserable. Rarely smiled. It took years and so much hard work to get him to a point now, where at 9 years old, people wouldn't know there was ever a problem.

And through all this he never complained. He put up with everything with a stoicism a person thirty years older wouldn't have had. And still today, morning and evening when he flinches as we put the drops in his eyes, never a word. He looks a little mournful when reminded that we have to do this for a few years, but no tantrums. No giving out. Just sucks it up. 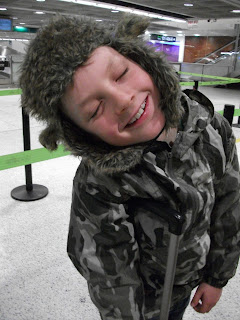 Now we love him too!
x

He is a very sweet little boy. I do have to stand up for the rest of the troop here and say they are quite amazingly brilliant too - you gotto bottle it, whatever it is - give lectures, write parenting books, you have the nicest kids on earth!!

(Of course, you do all realise that he'll probably be a drug dealing pornographer by the time he is 14 now that I've gushed all over the interweb about how brill he is.)

Congratulations! I do have to say, however, that anyone who thinks bowling isn't strenuous isn't doing it aggressively enough.

He is amazing - as are they all!Love the breakfast and lunches bit. You'd wonder about nature and nuture though, and if behaviour of first son influences behaviour of second and so on. Its prob a mix of everything, but a great Mom is an essential part:)

Actually Louise, yes, I do find the whole nature/nurture debate fascinating, espcially looking at my own living breathing experiement :)

I love Jedward. And don't forget Lord Lucan, he's been pretty big news this week too.

Children are a living experiment, aren't they? I've got the chalk and cheese twins, so how can it not be genetic? Both experienced virtually everything the same, at the same time. One is grumpy and egotistical like me, one is peace-seeking and shuns attention like Mr. T. Gene genies, I reckon.

I love mixed message parenting. I could do it at PhD level.