A Walk in the Park?

So, there we were this weekend.

My back, feeling it had kept quiet long enough, decided to give out. Pain, discomfort etc, etc. Like the trooper that I am, I took to my bed. Which is only fun for so long really. So, 4pm Sunday afternoon I remember (false memory syndrome anyone?) that gentle exercise is good for bad backs.

We're always forgeting it's there...

Off we troop. Child one on bike. Child two on skateboard. Child three on quad bike. (Okay, baby was in her buggy, but it's a fun image...) Commanding, striding hubbie and pathetic hobbling me. But hey, it was lovely, 'the nature' as child two (by now unsurprisingly off skateboard) called it, was wearing its autumn palette. The 'forever greens', (again as child two called them), beautiful. Offspring on his bike was thrilled to be let lose. Baba, was entranced by all around her, not a peep as she took in the splendid swollen liffey as it rushed over low waterfalls.

There were plenty of people about, also enjoying the invigorating chill and inspiring landscape. I began to forget about about my aching backbone. Not a single child whinged! Really a first! We felt all righteous and perfect.

Well, seeing as we always forget the Demesne is there, we haven't visited it that much. We don't know it as well as the other green spaces we frequent. We'd walked for about 50mins, and pondered, that surely, there was a direct route back to the car park. Yes, of course we should have had a little look at the park map before we set out, but...

No, there is no short walk around the demesne - or if there is we didn't find it. 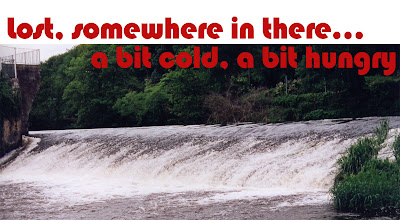 It was getting dark by now. The baby was no longer thrilled by the wonders of nature around her. She was just cold. Child number one was getting freaked out by the empty park in the dark. The bats didn't help. Oh yes, there were bats. Only child two kept the chin up. Not a complaint, not a moan, and he even came over and rubbed my back every now and then. (Of course he was just aiming for two points on his reward chart once we got home... but should I question his motives? Does the end not justify...?)

The ruined church that was so quaint on our outbound journey was now just plain sinister in the dark. Hubbie had been reduced to carrying the freezing infant - who only wanted to be carried by mama, but sadly the bad back that has prompted this whole escapade prevented me from taking her. Cue 'don't you love me anymore' looks from herself. Her wails must have been audible all the way down the Liffey valley.

Of course, hubbie thought this was a good time to mention the Blair Witch Project.

Have I mentioned the bats?


By the time we crossed back over the liffey, and could faintly see the red beacon of the SPA hotel sign, it was pitch black. If eldest child cycled just too far ahead he disappeared, swallowed up by the shadows. All this accompanied by the sounds of the rushing river beside us and the knowledge that I was the only swimmer in the family. The writer in me started composing the headlines for the papers tomorrow 'Foolish Family Drown!' etc, etc...

The only highlight was child number two's running commentary on how every step was taking pounds off me! He'd look at me in the half light and exclaim 'Mama! You're getting less overweight by the second!" - (we've taught him to say over weight as he is the most pass remarkable five year old around. And if it wasn't for his severe speech delay - which has meant people don't realise what he's saying - he'd have been pulverised by many a sensitive fatty by now.)

After what felt like forever, in reality just under two hours, we made it back to the car park. There, on its ownsome, was our vehicle. As one we collapsed into it. Eldest child swearing never to return to this hideous place. Hubbie a little snappish. Baby just happy that mama could hold her now. Me, wondering, if a two hour epic odyssey around the demesne counted as 'gentle exercise'. Only pollyanna child was cheery - and enquiring whether he'd get three points on his reward chart for being so good. 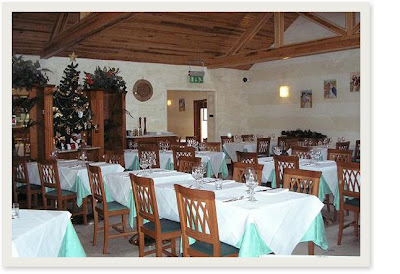 There was only one thing for this traumatised family. We took ourselves, without delay, to Pistacchio's Italian restaurant in Clondalkin village. Pizza! Risotto! Garlic bread! Coke and beers. Banofee and cappuccini.

Shame I undid all the good work and am overweight again. Ah well.

And, interestingly, my back isn't feeling too bad today.

That sounds like a larf alright... You could have continued out the other side and down through the village and back out by the ball alley place - about 3 hours. You should have brought "Treasures of Lucan" with you!! a handy hand drawn map and all.

Ah - lucan demesne. Clondalkin colonised it many years ago. Ever see the spray painted and oft set on fire green container near the footpath entrance? That's my baby!

Should have brought Treasures of Lucan... if nothing else would have given me something to read to pass the time it took to get back to the car.

Yes, Colm, I know the container. I'm sure you had nothing to do with any spray painting or pyromania. As for your paternalistic feelings towards this inanimate object...

Like the new sweetie background by the way - makes my teeth want some sugary badness!!

But of course, now that I worked out what to do to change the background I won't be able to resist changing it every few days... I'm like a child with a new toy..

how do you do the writing on pictures thing by the way?

Ah, the joys of photoshop.. but I reckon there is no reason one couldn't do text on pictures in Paint.

Hmmm. Is this blog really and excuse for not writing 'proper' fiction! Because I don't believe you walked for 2 hours - and in the dark too - and then gorged on gorgeous garlick bread. How I wish I was you.

That saga has a place in a prizewinners list in a competition somewhere. Now all we have to do is find it!

Won't be there on Sat. Sorry, but going to Temple Spa Hotel for a make-over (well, for a night anyway!) With legs all bandaged I won't do well in the seaweed bath, but a back pummelling and application of a (permanent) face mask should do the trick.

If somebody you have never seen before thumbs her nose at you next weekend, just look a little more closely.......