No one likes going to Mass on Sundays - its dull. There, I've said it. I'll sit here and wait for the Cock to crow. (I just had to google that reference, to make sure it was a Cock that crowed and not some other bird. I think there are few things as terrifying as innocently typing 'cock' into google...)

But we go. We're a pragmatic family. The kids whinge and the confirmed heathen husband looks for any excuse not to go. He got lucky yesterday, Baby Oub woke up and seemed rather not her usual rambunctious self. They got a pass to stay at home. 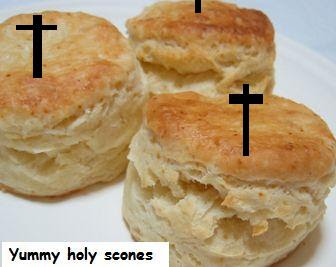 But recently, he hasn't been so quick to look to stay at home in his holey pyjamas... because we discovered something... There is a lovely parish centre just beside our church. And they have a little cafe inside. The homemade scones they sell there are the best I've ever eaten. AND.... They are free on Sundays! Oh yes. They don't actually make you prove you've just emerged from Mass to take advantage of the delicious fare, but we do have some morals...

There is one other high point to Mass attendance in our locale. It is the priest who says the 12.15 mass. It used to be The Lovely Fr Joe. A very interesting man. You could listen to a sermon from him and not want to a) gnaw your leg off from boredom b) throw rotten fruit in disgust at the horrific recent history of the Catholic Church in Ireland. But The Lovely Fr Joe got moved on. Like a holy vagrant he's been booted off to the next parish. I think. Anyway, he may as well be departed to his blessed eternal reward for all the differences to us. Because we've been left with Fr Tenuous. Or Fr Trendy Tenuous Pop Culture Reference, to give him his full name.

I had high hopes for him. When he took over from The Lovely Fr Joe, he brought a bit of moon rock with him for his sermon. 'Hmm, I though. Well done for making an effort, this could be interesting.' Sadly I cannot tell you what this sermon was about as roughly thirty seconds later I was in a coma.

Mass Dodging God Doubter Mr Oubliette had his first experience with Fr Tenuous at the 5.30 Christmas Eve mass. Mr Oub looked at me perplexed as Fr Tenuous held up a talking Homer Simpson doll to the mike. The priest made Homer talk, and then tenuously parlayed the 'loving' relationship between Marge and Homer into some sort of sermon about family, or something. I'm not sure as I struggled to remain conscious for as long as I could, but the inevitable happened soon enough.

It was with great amusement that I listened to the start of his sermon a few weeks ago when he mentioned going to the movie to see Avatar. The relationship that this had to his comment on the gospel is lost to me at this stage, but I did have fun rushing home to tell my Bound for Hell for his Disbelieving Ways husband.

I was ready for him this week. I sat forward - what would be our 'in' to the word of God this week??? Of course, as hubbie was at home minding the above mentioned sick baby he missed this weeks Tenuous pop culture reference... I made him guess...

'The Wire' - yes, that gritty, violent cop show. I think I snorted as the words escaped his mouth. It was like - 'they are foul mouthed in 'The Wire', but Gods words are nice...' 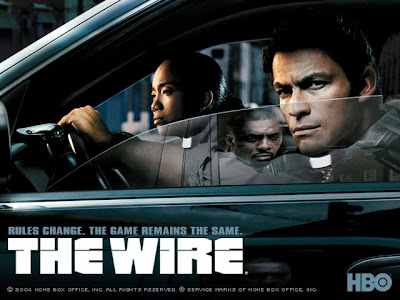 I feel a little mean now, being all sneary about this well meaning man of God. Sure, isn't he only doing his best? In fact it's not very Christian of me, is it?

Oh well. I guess I'll be keeping Mr Oubliette company for eternity after all...
Posted by Domestic Oub at 11:59 AM

Britney Spears was mentioned at my first ever Rosland Mass. It does keep things interesting - the auld celebrity mentions etc... like watching Xposé without the fast camera angle changes

I think these "new cultural references" sermons are being taught by every school/seminary/college for priests and vicars and ministers now. It's always the ones that have just left training that do it, and our first experience was a Watch Night service with the Church of Scotland about, ooh, eight years ago now, which was all about Star Trek and VGER (it's from one of the films, I think) and I just sat there with my mouth open. Never got the link.
However, the Homer Simpson one does take the biscuit (or Holy Scone).
I wish I had thought of calling him Revd. Tenuous though. Good one!

speaking of the simpsons being a model for marriage - I remember one particularly terrible moment when the priest was telling a story about marriage break down - which concluded with the embittered wife leaving a note for her husband who had left her a note asking her to wake him early, and she left him a note saying "wake up" - I laughed embarrassingly loud - he meant it as a serious sad story about modern marriage - It just struck me as hilarious.

There was a leather jacket wearing chipper of a friday night going priest who missed the passion out at Easter cos he'd already done it once and was a bit tired!?
Catholic church, ya gotta hand it to them.Money that is. Except we don't.Ok against all odds we still go (institutionalised ?) Hanging in there by our fingernails but were hoping,demanding (as best you can when you have no voice), praying? for radical root and branch reform and revolution, from pope down to parish priest (the shortage of which can only be a blessing in disguise)else how on earth (let alone heaven) can it continue? We should be rioting in the streets!

Titus - I could forgive this guy if the rest of his sermons were interesting...

Niamh - Oh, I'm lucky i wasn't there to hear that about the note. I'd have been laughing in stereo!

TFE - I know...why do we go considering everything? Sigh. I don't know if I can answer.

Mass is so very boring, but this post wasn't. Priests need to go to lapdancing clubs and take drugs and smash the odd bottle over a parishioners head - i think that would make em hip! And sex, more sex for priests I say - with Grown ups

You have to credit him for trying - you know all totally pointless - but he is trying. I would try and suggest to him that the kids love video games, like Grand Theft Auto or zombies. And Usce, don't you think they have had enough sex. I mean they are celebate like their fathers and their fathers

No, they weren't. And he strummed a guitar sometimes. With a "Praise Band".

Howdy Domestic Oubliette - I'm not sure how you stumbled across my blog to comment on it (you don't search everywhere for phrases potentially disparaging the Irish, do you?), but now that I've read yours, it will become a regular. That's good stuff.

Maybe you could give some thought to a lottery or pool among the congregation as to what cultural reference will be used each week (probably not a good idea to yell out "BINGO!" during Mass, though).

Welcome back Dead Acorn. (see about three posts ago.. jog the auld memory.)

I love your blog!