So, it was the D'Oubs wedding anniversary yesterday. 8 years of D'Oubby bliss.

We nearly forgot about it.

We were just soooooo busy. Toddler Oub has the chicken pox, Second Son had his communion, the living room wall has come down and new floors, light fixtures, etc have gone up. Baby Oub (ver2.o) is as demanding as ever, though (whisper it!) she is considering sleeping the night.

That said she had a blip on Sunday night. And so, exhausted from Baby being awake alot, we woke yesterday morning not a little cranky. He said something. I was snappish. He said 'Happy Anniversary.' I said, 'Oh yeah.' And then he went to work.

As he says himself, it's not so much the 7 year itch, more the 8 year rash. 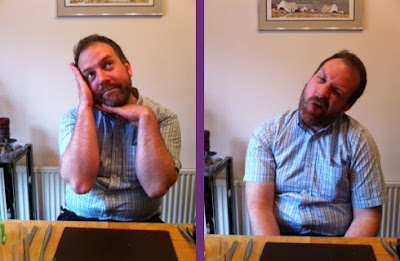 Hands off, he's taken!
Altogether we've been together twelve years (I think...) so you kinda get used to someone over that length of time. Does his heart palpate when I walk in the room? Maybe, but it's more likely to be the beginnings of coronary health disease. Do I swoon when he returns each evening from work? Er, I probably only swoon from standing up too quickly to nag him about something.

But to be honest, I think that's only natural. I distrust those couples who say they are as passionate now as they were the first day they met. It sounds exhausting! And really, with all that passion, who's taking the time to fill the dishwasher?

I'm not advocating the banishment of passion. Don't get me wrong. We've all enjoyed a soupcon of wild animal rapture in our time. Possibly even more than a soupcon. But isn't that what your twenties are for? And that's not to say one shouldn't make the effort to peer through the domestic fugue and see that quiet IT programmer he once was. And maybe growl a little in his direction, while doing curling cat claw hand gestures, when he's looking particularly good in a suit.

But, you know, I like him better now than I did then. He rubs my smelly feet every evening without complaint. He makes me tea and toast too. Never whinges. He's a brilliant dad. He'll assemble a flat pack piece of furniture at 3am because my family are due the next day and I really, really, want it to be ready. He'll sleep on two pushed together chairs in hospital when I'm so sick after yet another baba and never complain. He will buy me underwear in M&S when I decide from my hospital bed that that's what I need him to do. He puts up with me going on and on and on and on about my sore knees/back/hips. He'll dig the allotment in the snow cause it's what my mad brain decides needs to be done - and he doesn't even like vegetables. Not a word passes his lips when I go out four nights week, requiring him to do the Scout run on his own with all the kids and do dinner and put them all to bed yet again. 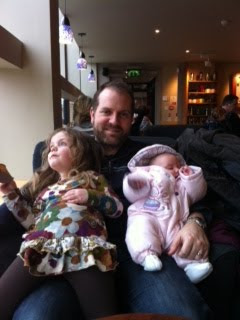 Hottie!
Perhaps I'm wrong and we are still passionate about each other.

The curling cat claw with accompanying growl gives it away. That just doesn't happen without an underlying passion.

Yay! I am declaring him Venerable and seriously considering him for beatification. I know I'm not the Pope and he's not dead, but hey, some of the stuff he does is bloody miraculous. I think it was the Scout bit that got me the most.

Socks: me and mine don't argue! Yikes!

Ah the big one day a year things are overhyped, tis the day in day out love, devotion and slavery that matter most.

Mr VC only copped my b'day is comin up this week thanks to a notice on facebook, but I suppose I can't blame him being a bit fuzzled just now.
Gorgeous post.