I drove my chevy to the levy, but the levy was quite harsh and will probably lead to strike action..

I think there has been a 10% levy introduced on my energy levels. Already suffering a sudden and rapid slow down, my output has been reduced to (the equivalent of) a three day week and already isn't looking good for the rest of '09.

I suspect I need a recapitalisation of my kinetic liquidity. Can you help Mr Cowen?

Hmmm? No? Thought not.

Anyway my vim deficit is why I haven't posted in a week. And it's not that its been a quiet week, no. A lot has happened. There's been snow. And my sore tooth. Middle child's obsession with death and religion has returned. Baby has learned to say 'Spongebob'. She has also stopped eating carrots. I finished my Richard and Judy book club pick. 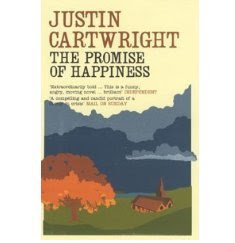 Perhaps I'll fill you in on 'The Promise of Happiness' - Justin Cartwright, the book I told you all about buying a few weeks ago. Well, what can I say? It was a portrait of the Judd family torn apart by the jailing of their brilliant daughter Juliet. The story starts just as she is about to be released after a two year sentence.

What did I think of it? Well, if you like your literature with an teeny whiff of incest and a lot of coastal Cornish scenes - well, this is the book for you! I neither liked nor dislike it. I was able to put it down at night. But I did want to pick it up again the next evening. While I reckon the problem was that it hadn't quite enough plot to sustain it, the characters were pretty well drawn. I was reminded of the book 'The Private Lives of Pippa Lee' - Rebecca Miller. The contrast you see. I believed the actions of Mr Cartwrights characters. I could have told you what each member of the Judd family would do in any random situation, as he had written them so well. But as for the eponymous Ms Lee. Oh, such an irritating book in my view. Those characters just danced to the contrived plots tune. They might have done anything. It felt that Ms Miller thought she had written herself a daring little book. It was just book club by numbers in my oh so humble opinion.

I picked up ' You Shall Know Our Velocity' - Dave Eggers. I've had this book for a few years but I haven't gotten further than page 60. Mr Eggers wrote the astounding book 'A Heartbreaking Work of Staggering Genius'. It is a memoir. It is all about how his parents died within a month of each other and he, at 21 years of age, takes on the care of his eight year old brother. You'll laugh. You'll cry. Read it.

So, on the strength of 'A Heartbreaking...' I picked up 'Velocity.' And I can't make up my mind about it. The writing is wonderful. As with Colum McCann I find myself rereading sentences because I think they are so wonderfully written... but with this book, I just don't feel gripped by it, even though I love the writing... strange. Maybe its like a bar of dark chocolate. A couple of squares are wonderful and rich, but you wouldn't eat a whole bar in one sitting...

I'll let you know if I get any further with it this time...
Posted by Domestic Oub at 9:38 PM

Do you think the heartbreaking work of staggering genius works mainly by the subliminal message every time you saw the cover?
I've heard that the unconscious is basically thick and believes everything it hears/ reads. As an experiment I think I will try and read that book someday with the front cover and spine completely covered, and then we'll see....

If your energy is so low, how can you read such demanding literature and describe the books so wonderfully?
Methinks you are having a dose of snowphobia and turning into a squirrell or something that hibernates.
This weather is truly draining - I can't even pick up a book. The wall is getting tired of being watched......
Drama Queen

From someone who now lives where the snow falls like the rain does back in Ireland, its grand to have you back.