It's a Wonderful Life... (watch out Domestic Oubliette's getting soppy again!)

Had one of those days today that reminds one that life is great, that honestly, crunch or no crunch, we have it perfect.

It started off with 10.30 Mass... no, I know that doesn't sound like the most exciting start to the day, but you see my little munchkin was reading a prayer of the faithful. He's doing his First Communion this year, so once a month at 10.30 mass, the kids from one class do all the prayers, bring up the gifts, etc. etc.

So - there were all the other little faithful prayer readers, all with their little bits of paper. He of course didn't have his. That would be far too much like organisation on his or his mammy's part. But he knew the prayer off by heart (its not like it was the Guru Gita or anything) Up they all trooped and read their prayers, very well of course. But truth be told, they do sorta chant them out (Dear lord bless our families - de da de da de da de de da de da de da...) When his turn comes, up jumps Domestic Oubliette Jnr. Head up, looking out to the crowded church - and he declaimed his one line prayer with the poise and confidence of Obama himself. Instead of 'Lord hear our prayer' I half expected him to announce 'Yes we can!'. 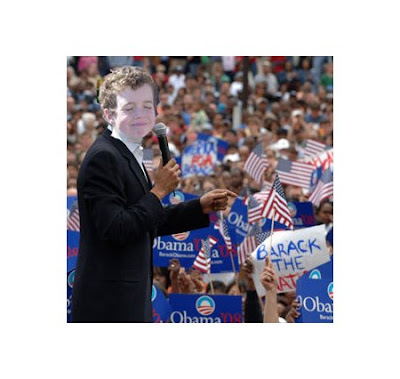 Was there ever a prouder mother? Never! I nearly shed tears.

But the kid's a born performer. It was practically jazz hands down the birth canal. If it wasn't for the fact that he looks so like myself and Mr Oubliette, I'd have sworn they swapped babies in the hospital. If I had been waiting, eight years old, to get up and read a prayer at mass - even with my very own prompter, twelve months preparation, a Valium drip and the prayer tattooed on my arm, I'd have wet myself, then sunk into a catatonic state from sheer terror.

So, after mass, off to the local coffee shop for celebratory lattes for the grown ups, hot chocolate for the boys and a babycino for the baby. And all topped of with all day breakfast sandwiches for everyone. Bliss. You know you've gotten it right when the baba is dipping bread into her hot milk, and the boys have to go to the bathroom to wash off the chocolate mustaches.

We then drove across town to the Botanical Gardens. Star child initially declared the location boring and lame (too much American tv perhaps?) Once we bet the cheekiness out of him, everyone had a fabulous time chasing squirrels, dodging crocuses, sweating in Palm houses and generally being as wholesome as its possible to be. We'd have to have snorted cocaine off hookers bosoms to redress the wholesome/degenerate balance we were so gosh darn picture perfect.

Back across town again. I fell asleep in the car. I'm sure it was all slack jaw and drool, but so nice to have a little snooze. Once we got home, hubby played a blinder, and got the dinner. Yummy fajitas. The food lasted moments before it was gobbled all up. At which point I decided to smear middle child's face with ketchup. He saw the funny side.

Dessert was strawberries, cream and champagne. (Probably sufficient to redress the wholesome balance :)

Hubby has just finished watching Lost. We might watch a dvd now, probably early 2000 comedy series Spaced. He'll probably get me a cup of tea, or maybe a beer if I feel like it. Then, hopefully not too late I'll get to bed. I'll read a bit of my book (currently How To Lose Friends and Alienate People - Toby Young.) Lights out, and if I'm really lucky, some sweet dreams.

bless you and yours mrs, that sounds like a perfect little sunday. No digging up the patio this week then....... just dropped off G's trainers to his work and glimpsed myself a hoarde of young man flesh in the form of his patients, has cheered me up no end...........

Thanks guys, was lovely day :) And I've just uploaded the pics.

Gosh Darn, get that kid in the movies to make some money... :)