Too busy to blog? 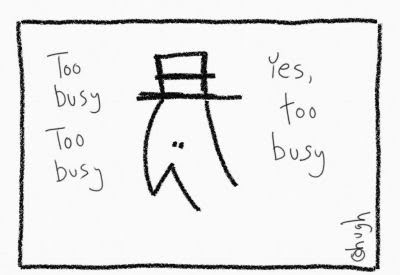 I've noticed that for the past June, July and August I've averaged only three posts per month. And seeing as David Mohan provided me with at least one of those posts, its a pretty paltry tally.

Currently I've been occupied with a collapsing ceiling and flooding of my attic. My baby recently turned two. The gourds have powdery mildew, the sprouts fighting the good fight against the cabbage whites and the rhubarb has staged a miraculous death bed recovery. Friends and family have been visited with the twin trials of tweedle-doom and tweedle doomer. I've worked hard to ruin VariousCushions burgeoning radio career.

Perhaps its just been too much happening.

And still, I can think of nothing to say.

Love pools purple in our ankles
the pathologist tuts.Checks his watch.
Calls it.
We died two years ago.
The bacteria feast on our viscera
growing fat on blame and bitterness
We go stiff then liquid
oozing mistrust and lies into the carpet.
zip us up, what little that remains,
identify us using record.
photos of smiling happy times.
letters we wrote with love.
vows uttered. hands held.
children.
We died two years ago
Painful, agonising and slow.
Posted by Domestic Oub at 11:59 PM

Oh dear! I hope we didn't suffer too much!

Well, if you do nothing else keep doing that darn poetry. I love that.

Tis hard living a busy life! Really like the poem, sometimes the ending of a relationship can feel like a death, sometimes it is worse as you see the other person around and with someone new. The imagery is fantastic, really liked it.

Like the cartoon. And the poem. Good one. I can almost smell it!

Raw:
The bacteria feast on our viscera
growing fat on blame and bitterness
Sad:
letters we wrote with love.
vows uttered. hands held.
Good poem.Good luck on Sun, tell Mrs Niamh to have a pint of whiskey before she broadcasts to the nation.