So long and thanks for all the crazy 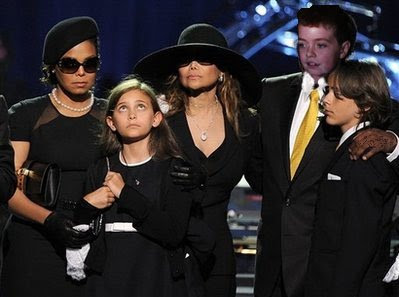 So, we're watching the Michael Jackson memorial last night. One of the one billion (apparently) world wide who did. I haven't been loosing too much sleep over the demise of the great wacko one, but felt, a bit like dear ol' Di, this would be a fun funeral/memorial to watch.

The Oubliette kids of course weren't happy to have me switch over from Nickelodeon, it is the summer after all, eight weeks of telly and only breaking to sleep. (Feel free to call social services.) I explained that it was a funeral type thingy for this guy who was a great musician. Senior child was all interested until I corrected him and said , 'No, musician, not magician.'

Younger son pottered off, I'm amazed he still had the use of his legs from all the sitting on the sofa, I'd begun to think they'd atrophied. Who knows where he went or what he was up to. He was quiet and that's generally enough for me.

The memorial began and was enjoyable in exactly the tacky ghoulish way I expected. But about fifteen minutes in I hear this sobbing. I look over at 8 year old son on the sofa and he's got a cushion to his face and is bawling. Being the sensitive type that I am, I asked him what the matter was.

"The telly, its soooooooooo sad!" he wailed.

This from the child who'd never heard of Michael Jackson twenty minutes earlier. I had also mentioned that Jackson may have done 'bad things to kids' while he was alive. This didn't seem to matter anymore.

But I shouldn't really have been surprised. This son of mine once had an emotional meltdown when he discovered a hole in his sock.

That said, he is a peculiar child, because other times you could tell him that 1) you'd ritually sacrificed his pet hamster in pursuit of a black magic ritual to wither the drawing arm of all the Ben 10 cartoonists and 2) you'd firebombed the entire Domino Pizzas chain - and he'd barely bat an eyelid.

Well, anyway, yesterday was obviously a 'the world is a cruel cruel place' sorta day.

Being a not entirely uncaring mother I gathered the weeping mess into my arms and tried to cheer him up. I thought telling him the silly names of the kids would do the trick. So, I told him about the two boys with the same name, Prince Michael and Prince Michael II. I threatened to rename his brother so they'd both have the same name. Didn't work. So, I thought hey, 'Blanket' is a really silly nickname, that's bound to jolly him out of his wailing and gnashing of teeth.

What did he say?

Then I got a bit annoyed at him.

Thankfully his father came home at this point and distracted him.

I can only thank the good Lord in his heaven above that we didn't keep watching till poor little Paris spoke. Even I was touched by that. What if son had seen it? We'd probably have had to take his shoe laces away.


(Coming Soon : Next blog posting will be a guest posting from The Talent Mr DublinDave)
Posted by Domestic Oub at 4:08 PM

Awww, was he hungover? I always cry easily when I'm hungover? :-)

I never told you I worked for social services, did I?

hungover? What a strange word? I have no understanding of it.. (was that enough?)

so convincing - you could be the mother outta the waltons... I never meant all those terrible things I said about ya!!!

Thankfully I missed it. Still reeling that Simon Cowell found a way to make money out of it... holey moley. Bless DO Junior-I though...

Ah I watched too. Sorta enjoying the fact that my kids are still impressed by smooth criminal and that but also a bit pissed off that we'll have a saturation of primary school kids who only like Elvis - i mean MJ

Beedlemama - Simon Cowell, you kinda gotta admire his unstoppable march forward to rule the entire entertainment world and insult everyone along the way...

Uisce - the mad fans are only going to get worse... how long till we start getting the MJ spotted in a diner in Nowheresville, usa?

And there was I, sorting out the affairs of state on the radio and missing the whole thing. Boo Hoo!

Aw. I have a sensitive 7 yr old boy too. Sweet kids.

I may give out, but I wouldn't have it any other way :)