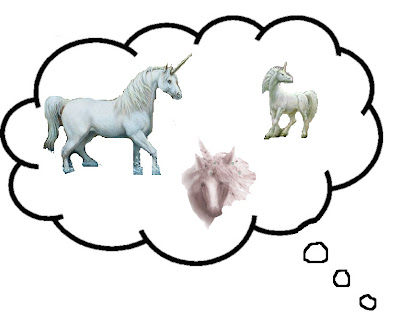 Middle child is in love.

Well, he's been in love for a while with a pretty little girl in his senior infants class. But even when you're six, love rarely runs smoothly. He confessed that a few of her games were 'a little obvious'. (I believe he was referring to the playground variety, rather than 'Men are from Mars, Women from Venus' style games.)

He looked serious and shook his head.

"She just sits there." he said. "Maybe she's thinking."

Then he uttered a sentence that must be hardwired into the male brain.

"I have no idea what girls think about."

I nearly crashed the car from laughing. I informed him that this question had troubled male minds for millennia. He nodded sagely.

He was silent and contemplative for a little while. Then he piped up.

A better guess then some men :)
Posted by Domestic Oub at 9:59 AM

I hope its not Freudian!
But maybe he has discovered something that will mark him out a a genius (once we can work it out).

Unicorns, of course!!!! Now it all makes sense! Or else it is some reference to women living in a fantasy world!!! :P

It is the horror of men that drives us into a fantasy world to escape.

Think Middle child is destined to discover something - as he says himself 'I was born with a big brain, y'know.' Hopefully he won't discover that the world is cold and unhappy place...

he's a genius, honestly I just wish I could stop thinking about unicorns sometimes, (not in a freudian way), (or maybe it is) (darn it)

Actually my niece is quite into unicorns (insofar as you can be into a mythical beast.. or is it..) so actually he is probably right. Go Charlie! Woo her with chit chat about horns! (oops inappropriate innuendo :) )

P has been in love with an Older Woman from his playschool. He even brought her in a Valentine's card on the big day, completely off his own bat. In Canada, it is the norm to give all your classmates little favours on V-day, boys and girls alike. Over here, he was the ONLY child who gave another child a valentine! the precocious little casanova lol

Have a great holiday! C x